“Wake Up and Draw” and multiple store events planned

LOS ANGELES, CA (August 23, 2017) – The Hero Initiative, the charitable organization dedicated to helping veteran comic creators in medical or financial need, is celebrating the 100th birthday of Jack “King” Kirby on August 28 with a little help from Jillian Kirby, founder of the Kirby4Heroes campaign.

More than 50 artists will get up on the morning of August 28, 2016 to simply “Wake Up and Draw.” All drawings will be featured in a special gallery at ComicArtFans.com, and fans can follow the action through the day on Twitter searching hashtag: #WakeUpAndDraw. All drawings will be auctioned to benefit Hero Initiative starting Sep. 5, 2017!

Artist Phil Hester will reach the end of a long road. Four years ago, in conjunction with Kirby’s 97th birthday, Hester drew 97 Kirby characters. He upped the ante to 98 and 99 the last two years, and will close out in classic fashion with 100 Kirbys this year! Phil’s drawing marathon will take place at Krypton Comics in Omaha, Nebraska, and will be livestreamed as well!

And the baton is passed! Get to The Source Comics in Games in Roseville, Minn. On August 28, where artist Brent Schoonover will be doing Kirby drawings all day as well!

Jillian Kirby, Jack’s youngest granddaughter, has spearheaded the “Kirby4Heroes” campaign since 2012. Jillian has recruited a number of comic stores to donate a percentage of their sales to Hero on this special day. Individual fans can visit the official Kirby4Heroes campaign Facebook page at https://www.facebook.com/kirby4heroes and donate via the PayPal link at www.HeroInitiative.org. Please type in “Kirby4Heroes” in the special instructions box.

“I founded the Kirby4Heroes campaign when I was 16 years old in June 2012, as a way of honoring the legacy of my grandfather, comic book artist and creator Jack Kirby, who unfortunately died the year before I was born,” said Jillian Kirby. “Over the past five years my campaign has been fortunate enough to raise over $80,000 for the Hero Initiative, and this year my goal is to push it well over $100,000! My Kirby4Heroes fundraising campaign just seems to be expanding and blossoming with new creative ideas continually contributed by many Jack Kirby fans. Watching everything come together has been very rewarding, and I look forward to the culmination of a fantastic show of support on August 28th!”

All About Books & Comics, Phoenix, AZ

Phantom of the Attic Comics, two locations in Pittsburgh, PA 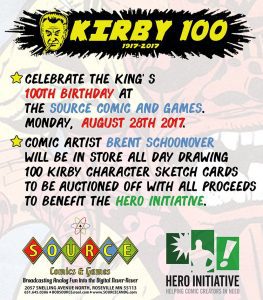