Gemstone Publishing and the Hero Initiative, the first 501 (c)(3) charity dedicated to helping comic book creators in need, have teamed up every year since 2010 for the exclusive Hero Initiative limited edition of the Guide. This year’s Guide will go on sale at Comic-Con International: San Diego on Wednesday, July 17, 2019 at the Hero Initiative booth, #5003.

As with past collaborations between Gemstone and Hero, this version will be available only in a special hardcover edition, limited to 500 copies. There will be no soft cover edition of this version, and it will retail for $35.

“The power, creativity and mass appeal of comic book stories was on full display this past weekend as The Avengers: Endgame took in more than $1.2 billion around the world. The purity of Alan Davis’ beautiful line work captures what we have long loved about the characters and what ‘civilians’ have been discovering through the movies,” said Steve Geppi, President and CEO of Gemstone Publishing and Diamond Comic Distributors. “It’s wonderful to have his fantastic cover on the cover of the Hero Initiative edition of The Overstreet Comic Book Price Guide #49, everyone at Gemstone hopes it will help raise a lot of money for this great charity.”

In a diverse career, Davis illustrated Marvel UK’s Captain Britain co-created D.R. and Quinch for 2000AD, and drew Batman and the Outsiders and Detective Comics for DC. He worked on two New Mutants Annuals and three issues of Uncanny X-Men before teaming with Chris Claremont to launch Excalibur. The also created, wrote and illustrated ClanDestine, among other projects.

Since Stan Lee and Jack Kirby introduced The Avengers #1 in 1963, banding together “Earth’s Mightiest Heroes,” readers have delighted in their comic book – and now big screen – adventures for 56 years. Davis’ previous association with the team includes his work on Avengers (vol. 3) #38–43 and 63, Avengers: Ultron Forever #1-3, Avengers Prime #1–5, and Avengers: The Children’s Crusade: Young Avengers.

The standard editions of The Overstreet Comic Book Price Guide #49 feature Batman’s Rogues Gallery by Tony Daniel, and Firefly by Diego Galindo. The limited Hall of Fame edition, featuring a 100th anniversary appearance of Zorro, is illustrated by Michel Wm. Kaluta. These are available in soft cover ($29.95) and hard cover ($35). The oversized limited edition, The Big, Big, Overstreet Comic Book Price Guide #49, features the 25th anniversary of Shi by Billy Tucci. It retails for $49.50.

The Hero Initiative is the first-ever federally chartered not-for-profit corporation dedicated strictly to helping comic book creators in need. Hero creates a financial safety net for yesterday’s creators who may need emergency medical aid, financial support for essentials of life, and an avenue back into paying work. It’s a chance for all of us to give back something to the people who have given us so much enjoyment. Hero is a federally recognized 501(c)(3) charity. The Hero Initiative Limited Edition Hardcover version of The Overstreet Comic Book Price Guide #49 is scheduled to go on sale at The Hero Initiative booth at Comic-Con International: San Diego on Preview Night, Wednesday, July 17, 2019 and afterward through a limited number of Hero affiliates. This version will be available in hardcover only and is limited to 500 copies. The retail price is $35. Information on special signings during the show will be released soon. 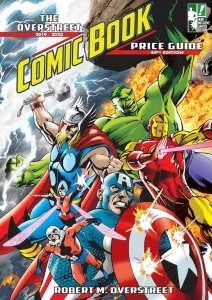