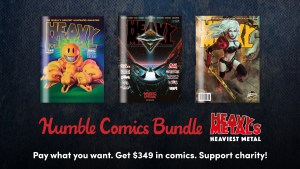 “The partnership between Heavy Metal and Humble Bundle offers a rare opportunity to not only sample stunning work our creators and editors have done for the magazine, our many comics, and prose books, but also a chance to support the noble mission of The Hero Initiative, a charity we at Heavy Metal truly admire,” said Kris Longo, Heavy Metal’s Chief Sales Officer. “We’re excited to give new fans and old the opportunity to not only enjoy Heavy Metal’s collection, but also help creators in need in equal measure.”

“We appreciate the ongoing efforts of Humble Bundle to better the lives of comic creators, and we’re delighted to work with Heavy Metal to bring this bundle to fans everywhere,” said Jim McLauchlin, President and co-founder of The Hero Initiative.

Humble Bundle offers limited-time collections of games, books, software, and more. Fans can simply pay what they want and choose where their money goes, including to charity. Most bundles come in tiers starting at only $1. The Humble community has contributed over $195,000,000 to charity since 2010, making an amazing difference to causes all over the world.

But time is limited! This offer ends Thu., May 20! GO NOW: https://www.humblebundle.com/books/heavy-metals-heaviest-metal-books

First published in 1977, Heavy Metal Magazine, the world’s foremost illustrated fantasy magazine, explores fantastic and surrealistic worlds, alternate realities, science fiction and thrillers, in the past, present, and future. Writers and illustrators from around the world take you to places you never dreamed existed. Heavy Metal Magazine was the first magazine to bring European legends like Moebius, Enki Bilal, and Pepe Moreno to the U.S. while showcasing American superstars like Richard Corben, Jim Steranko and Bernie Wrightson. The magazine continues to showcase amazing new talent and established creators. Now published monthly, Heavy Metal Magazine features serialized and standalone stories, artist galleries, and interviews. Heavy Metal Entertainment is home not only to its iconic magazine, but also an incredible slate of comics and prose novels, a podcast network, and television and film projects. With CEO Matthew Medney now at the helm, Heavy Metal promises to boldly go where no one has gone before. Explore ancient secrets, forgotten worlds and savage futures…experience Heavy Metal. Join us at www.heavymetal.com.

Since 2010, Humble Bundle has forged a path for indie developers to have a platform for their projects and voices. It has been and always will be a priority for Humble to build bridges between indie video games and consumers, all while pursuing the universal desire to be a force for good. The combined efforts of Humble with their supportive developers and enthusiastic community has amounted to over $195 million raised for charity to date. This is the DNA of Humble and has influenced every decision since its inception.

ABOUT THE HERO INITIATIVE

The Hero Initiative is the first-ever federally chartered not-for-profit corporation dedicated strictly to helping comic book creators in need. The Hero Initiative creates a financial safety net for yesterday’s creators who may need emergency medical aid, financial support for essentials of life, and an avenue back into paying work. It’s a chance for all of us to give back something to the people who have given us so much enjoyment. Since its inception, The Hero Initiative has had the good fortune to grant over $1 million to the comic book veterans who have paved the way for those in the industry today. For more information, visit www.heroinitiative.org or call 626-676-6354.

HULKS, JOHNSONS AND MORE TEAM UP IN ‘DOUBLE VISION’ AUCTIONS!