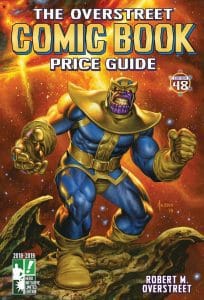 [Los Angeles, California and Hunt Valley, Maryland] – The power of Thanos, on full display this past weekend with the incredible debut of Avengers: Infinity War, has been known to comic book fans and dealers alike for decades, almost since his debut in February 1973’s Iron Man #55.

Now, Gemstone Publishing and the Hero Initiative, the first 501 (c)(3) charity dedicated to helping comic book creators in need, have teamed up with acclaimed artist Joe Jusko and Marvel Comics for a spectacular Thanos cover for a limited edition of The Overstreet Comic Book Price Guide #48. All funds raised from the sales of this volume go to Hero.

As with past collaborations between Gemstone and Hero, this version of the Guide will be available only in the special hardcover edition limited to 500 copies. It will go on sale at Comic-Con International: San Diego on Wednesday, July 18, 2018 at the Hero Initiative booth, #5003. There will be no soft cover edition of this version, and it will retail for $35.

“Movie fans all around the world have just learned what comic book fans have known for so long: Thanos is a great, complex villain, one who can definitely challenge The Avengers,” said Steve Geppi, President and CEO of Gemstone Publishing and Diamond Comic Distributors. “I’m so happy to have my friend Joe Jusko’s incredible Thanos cover on the Hero Initiative edition of The Overstreet Comic Book Price Guide #48, and everyone at Gemstone is equally happy to raise funds for this great charity.”

“Ever since I was a kid working in a New York City comic shop, I’ve known that you had to be seen as one of the most respected artists in the industry to make the cover of The Overstreet Comic Book Price Guide. Each new edition proved it; Kubert, Eisner, Barks, Wood, etc., all the way through to the greats of today. When I was chosen for a cover a few years back, I could not have considered it a greater honor to join the pantheon of supreme talent that came before me. To be asked a second time is truly humbling,” Joe Jusko said.

In a career that has spanned more than three decades, Jusko started out with the sale of his very first cover to Heavy Metal. Since then his work has appeared on paperback book covers, calendars, posters, t-shirts, toy packaging and more, including the multi-award-winning 1992 Marvel Masterpieces trading cards. That, of course, is in addition to a multitude of magazine and comic book covers ranging from Famous Monsters of Filmland and Vampirella to Edgar Rice Burroughs creations, Tomb Raider, and Marvel’s big guns.

The standard editions of The Overstreet Comic Book Price Guide #48 feature Green Lantern and Flash by Ethan Van Sciver and Planet of the Apes by Ryan Sook. Additionally, there is a limited edition Hall of Fame cover which features Howard Chaykin’s American Flagg! All are available in soft cover and hard cover.

The Hero Initiative is the first-ever federally chartered not-for-profit corporation dedicated strictly to helping comic book creators in need. Hero creates a financial safety net for yesterday’s creators who may need emergency medical aid, financial support for essentials of life, and an avenue back into paying work. It’s a chance for all of us to give back something to the people who have given us so much enjoyment. Hero is a federally recognized 501(c)(3) charity. The Hero Initiative Limited Edition Hardcover version of The Overstreet Comic Book Price Guide #48 is scheduled to go on sale at The Hero Initiative booth at Comic-Con International: San Diego on Preview Night, Wednesday, July 18, 2018 and afterward through a limited number of Hero affiliates. This version will be available in hardcover only and is limited to 500 copies. The retail price is $35. Information on special signings during the show will be released soon.