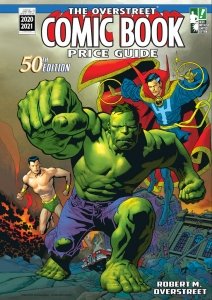 [Los Angeles, California and Hunt Valley, Maryland] – Acclaimed artist Kevin Nowlan will unleash his take on Doctor Strange, the Sub-Mariner, and the Incredible Hulk on a cover inspired by Neal Adams’ Marvel Feature #1 cover, the first appearance of The Defenders, for the Hero Initiative exclusive limited edition of The Overstreet Comic Book Price Guide #50.

Gemstone Publishing and the Hero Initiative, the first 501(c)(3) charity dedicated to helping comic book creators in need, have teamed up every year since 2010 for the exclusive Hero Initiative limited edition of the Guide, and Overstreet’s Golden Anniversary year is no different. Under normal circumstances this edition would have had its debut at Comic-Con International: San Diego. However, following the cancelation of the show and other Corona virus-inspired delays, the release date is now set for Wednesday, September 2, 2020.

The Hero Initiative Edition of The Overstreet Comic Book Price Guide #50 will be available through Hero’s web store on the Graham Crackers Comics website and from selected Hero-supporting local comic shops. For Canadian mail order, Hero suggests The Dragon. As with past collaborations between Gemstone and Hero, this version will be available only in a special hardcover edition, limited to 500 copies. There will be no soft cover edition of this version, and it will retail for $37.50.

“Kevin Nowlan’s interpretation of this classic cover and these characters is an instant new classic on its own. As one would expect from a consummate professional with such exquisite line work and superior composition, he hit this one out of the park,” said Steve Geppi, Chairman of Geppi Family Enterprises and President of Gemstone Publishing. “We’re very happy to feature it as we continue our efforts to support the Hero Initiative.”

“Being asked to draw a Hero Initiative variant cover for The Overstreet Comic Book Price Guide is a huge honor in itself, regardless of the subject matter. Later, when I found out I’d be drawing a new version of Neal Adams’ beautiful Marvel Feature #1 Defenders cover, my enthusiasm flew off the scale,” Nowlan said.

“With the disruption in the comics market, and of course throughout the world, it’s been actually sort of stunning to receive so many inquiries about what the Hero edition of the 50th anniversary Guide was going to be. I think Kevin Nowlan’s cover more than answers that question and will help us raise money so that Hero can continue helping comic book creators in need,” said Jim McLauchlin, President of the Hero Initiative.

Under the original cover by Neal Adams, Roy Thomas, Ross Andru, and Bill Everett introduced The Defenders in the December 1971 cover-dated Marvel Feature #1. Banding together Doctor Strange, the Incredible Hulk, and the Sub-Mariner, they kicked off a team (often called a non-team) whose membership would often fluctuate wildly over the decades, but always captured the hearts of fans.

The Hero Initiative is the first-ever federally chartered not-for-profit corporation dedicated strictly to helping comic book creators in need. Hero creates a financial safety net for yesterday’s creators who may need emergency medical aid, financial support for essentials of life, and an avenue back into paying work. It’s a chance for all of us to give back something to the people who have given us so much enjoyment. Hero is a federally recognized 501(c)(3) charity. The Hero Initiative Limited Edition Hardcover version of The Overstreet Comic Book Price Guide #50 is scheduled to go on sale Wednesday, September 2 through the Hero Initiative web store on the Graham Crackers Comics site and at a limited number of Hero affiliate retailer stores. This version will be available in hardcover only and is limited to 500 copies. The retail price is $37.50.