If you need more than two artists, here’s four! Or eight!

But some things are just too big to be contained!

What happens when you double up on the twofer idea? Well, you get this amazing jam piece of the Reign of the Supermen! Featuring the four versions of Superman who first appeared in that historical storyline, this incredible piece is brought to you by the four original artists of that epic: Dan Jurgens, Tom Grummett, Butch Guice, and Jon Bogdanove!

And yes, even after all this awesomeness, keep looking out for additional announcements featuring superstars such as Jose Luis Garcia-Lopez, Adam Kubert, Ed McGuinness, Dale Keown, Dave Johnson, Jeff Johnson, Mico Suayan, Jerome Opeña and many more! Stay tuned; you’ll be glad you did!

A gallery of artwork is available to view on Hero Initiative’s website, with regular updates. Follow the link HERE https://www.heroinitiative.org/portfolio-item/double-visions-auctions/

Amazing pieces are being auctioned off, five at a time, right NOW. Check out which ones are live at Hero’s eBay account. And don’t forget to bid while you’re there, and help support the comics industry! 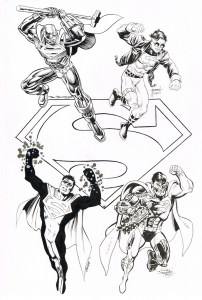 HULKS, JOHNSONS AND MORE TEAM UP IN ‘DOUBLE VISION’ AUCTIONS!
Scroll to top