WHAT HAPPENED TO AUGUST?
By Mike Grell

Somewhere around the end of July, I found a small bug bite on my right calf. On July 31, I developed flu-like symptoms and achy joints. That night I fell asleep while reading and awoke at about 4
a.m. with a fever. Alarmingly, my right eye would not track and my first thought was STROKE. Fortunately, I quickly put myself through the stroke evaluation and passed on all counts, so I was confident it was NOT a stroke even before I arrived at Summit Pacific Medical Center, where I was admitted on August 1.

After CAT scans, MRI’s, X-Rays, Ultrasounds and a spinal tap (nowhere near as much fun as the movie!) ruled out stroke, aneurism, tumors, diabetes, meningitis, MERSA, Lyme disease, and necrotizing fasciitis, we were left with what pretty much everyone suspected from the start: Cellulitis. By August 3rd, my vision had returned to 100% normal, my general condition was improving and my doctors expected me to be discharged shortly. Then the wheels fell off.

It seems cellulitis is a nasty bug that, even when you kill it off with antibiotics, produces toxins that destroy other tissue. As days went by, most of my right calf became an infected mass and my whole right leg swelled to twice normal size. After eleven days of around-the-clock IV antibiotics, it became evident that something wasn’t working.

I was transferred to the Infectious Disease Center at Providence St. Peter’s Hospital in Olympia, Wash., where they went to work on me, changed a couple of things in my treatment and, after two days, told me they were looking at sending me home on the 16th. That was the best news I had had in all of August. Once they started me on physical therapy to get my muscles moving again, I improved rapidly and was discharged on August 16th.

Nearly three weeks later, my leg looks like the aftermath of a motorcycle accident (complete with fire), but at least it’s still attached. But I missed an entire month’s work and was forced to cancel three personal appearances, which put us in a serious financial bind.

It was my art rep Scott Kress (of CatskillComics.com) who reminded me of the Hero Initiative, mentioning that they had helped another of his clients over a rough patch. I’ve always supported The Hero Initiative whenever and wherever I’ve had the chance, but never expected to benefit from the program. One email got an immediate response and immediate assurance that I was in the right hands. Within a few days, my situation was resolved, quickly, professionally and, I must say, with dignity.

That last part is more important than you might think. It’s very difficult to ask for help, even when you need it, even from folks whose whole purpose is to do just that. But the Hero Initiative takes the sting out of it with a caring, professional attitude that lets you know they do this because they really do care.

Thanks, guys. I’m looking forward to the next convention where I can put in time at the Hero Initiative booth. 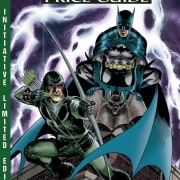 Russ Heath Speaks Out on behalf of Hero Initiative!

Tom Ziuko on the Hero Initiative
Scroll to top