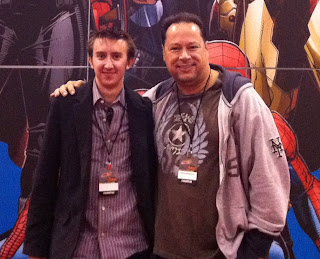 My Lunch with Joe Quesada
By Greg Pelkofski

Yes, I am the fan who spent $536.51 to have lunch with Marvel Editor-in-Chief Joe Quesada. Yes, it was one of the best experiences of my short twenty-one years on this planet. Yes, it was a “dream come true.” (And I’ve had some pretty strange dreams. No joke, the night before the lunch, I had a dream where Spider-Girl was fighting the Joker in a burning building. Crazy, right?) However, this meeting was even more meaningful as I am a college student looking to break into the comic book industry after graduation.

Ever since I was a kid, I knew I wanted to work in comic books. Well, I actually wanted to be Spider-Man, but by middle school I started to realize that even if a radioactive spider did bite me, it would probably kill me, not make me stronger. In college, I started tailoring my course work to becoming a comic book editor. I even got an editorial internship at AARP The Magazine in Washington D.C., after my repeated applications for Marvel met with failure.

In 2009, during a Friday night happy hour (so many of my family’s stories start this way) my parents impulsively decided to take me to the San Diego Comic Con for my birthday. There I attended Marvel’s “Breaking Into the House of Ideas” panel. I listened as writers, artists, and editors all told their unique stories of how they got a job at Marvel. One of the panelists made the point that each person needs to find their own path into comics, and once someone blazes that path, that trail goes cold forever. I knew I needed to find my own path into comics.

Jump ahead to October 1st of this year, again during happy hour, when I told my dad about how I saw Joe Quesada post on his Twitter page an auction for The Hero Initiative. The prize was lunch with Joe at the New York Comic Con. I mentioned it would be such a great opportunity if I could make it there the next week. Maybe it was the alcohol or maybe it was his parental desire to see me happy and successful (probably the alcohol), but he told me if I paid for the auction, then he would pay for my train ticket and hotel room in NYC.

Anyway, I won the auction. The next Friday morning, Oct. 8, came around quickly. But strangely, I did not feel nervous. I felt confident that the lunch would go well. Armed only with my knowledge of comics that comes from owning and reading over 3,700 of them, and with a pocket full of business cards, I set out to meet Joe Quesada at Five Napkin Burger in Hell’s Kitchen.

My first thought while waiting at the restaurant was “if this is Hell’s Kitchen, where’s Daredevil’s Japanese fortress?” No sign of the fortress, but shortly after noon Joe Quesada came in, escorted by fellow Hero Initiative Executive/Fund Raising Board member, Jim McLauchlin. Now, only seconds away from shaking Marvel’s Editor-in-Chief’s hand, the man who led my favorite comic book company through some of it’s best stories and made me want to work in comics even more, I was suddenly nervous. But I put on a smile and stuck out my hand, and with a firm shake introduced myself to one of my role models.

Almost immediately, Joe began asking me questions about myself and I was able to explain my desire to be a comic book editor. With an attentive ear, he patiently listened to me speak of my college studies and my experience as an intern at AARP. He explained how tough it is to actually break into comics, especially in today’s job market, but he also told of how rewarding the work is. We discussed editorial work in comics and what a typical day at Marvel is like, and I found myself wanting to work there now more than ever. (Also, finding out that I wouldn’t have to wear a suit and tie to work was a huge bonus.)

Soon, my inner nerd broke loose and I had to ask some questions about the comics that I enjoy so much. I listened as Joe explained his reasoning behind “annulling” Peter Parker’s marriage to Mary Jane (also the name of my cat), after which I completely understood why he made that decision. I also got some insight into the timeline of the Marvel Universe that appeared in a two-page spread in Avengers #5.

Throughout lunch, Joe and Jim told some funny stories of their experience in comics. Their stories just made me want to work with these people who sounded so similar to myself and with whom I felt a common geeky connection. Though, I seemed to have the last laugh when I said that I paid for the auction with my profits as an investor after Disney bought Marvel.

Nearly 90 minutes and one big-ass burger later, it was time for Joe and Jim to move on to their next scheduled events. Both were surprised when I said that I did not have a NYCC pass and came up only for the lunch. Jim let me borrow his pass for the afternoon so I could get into the convention and Joe introduced me to a few of Marvel’s staff. Joe and I got our picture taken together at the Marvel booth. It was an unexpected bonus in an incredible day.

While I realize I face great odds at being hired by Marvel straight out of college, I do believe this was one of the best opportunities I’ve had to help realize my dream of becoming an editor. More importantly, I had a great time and got to support the Hero Initiative, which helps the comic book creators who have provided me and countless others so much joy over the years. So, thank you Hero Initiative and Jim McLauchlin for setting up the auction in the first place. Thank you Joe Quesada for meeting me and listening to my little dream of being an editor. Thank you mom and dad for supporting me and my dream by paying my way to New York. And thanks to the comic creators for the heroes they made. 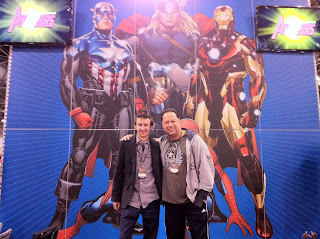 Thanks to All You Heroes at MegaCon & Beyond

Your quote of the day: “Guy drew like a dream.”
Scroll to top