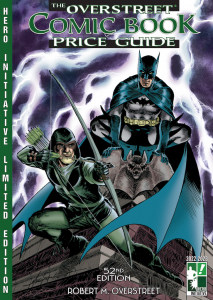 [Los Angeles, California and Hunt Valley, Maryland] – Mike Grell, the prolific writer-artist who has long been associated with Green Arrow, has teamed the character with Batman and brought both of them to the cover of The Overstreet Comic Book Price Guide #52’s exclusive Hero Initiative edition. The cover is colored by industry veteran Tom Ziuko.

Known for his early work on DC’s Legion of Super-Heroes, Grell created, wrote, and illustrated Warlord, and then his creator-owned series Starslayer and Jon Sable, Freelance. In 1987, he reinvigorated Green Arrow with the character-defining mini-series Green Arrow: The Longbow Hunters and kicked off an 80-issue run on the ongoing series it spawned.

Gemstone Publishing and the Hero Initiative, the first 501(c)(3) charity dedicated to helping comic book creators in need, have teamed up every year since 2010 for the exclusive Hero Initiative limited edition of the Guide. The Overstreet Comic Book Price Guide #52 goes on sale July 20, 2022.

As with past collaborations between Gemstone and Hero, this version will be available only in a special hardcover edition, limited to 500 copies. There will be no soft cover edition of this version, and it will retail for $44.95.

The Hero Initiative Edition of The Overstreet Comic Book Price Guide #52 will be available through Hero’s web store and on Hero’s store on the Graham Crackers Comics website and from selected Hero-supporting local comic shops. Owing to shipping costs, Hero encourages Canadian orders through https://www.dragonguelph.com/.

“Since we launched the Hero Initiative edition of the Guide with CBPG #40, we’ve been honored to support this great charity and their incredibly worthy cause, helping comic creators in need. We’ve also been pleased to publish some truly wonderful covers from an impressive array of artists, all of whom have turned out inspirational work on Hero’s behalf. Mike Grell is now very deservedly a member of the great roster of Guide artists, and I suspect fans will be as excited by this one as I am,” said Steve Geppi, Chairman of Geppi Family Enterprises and President and CEO of Gemstone Publishing.

“As Steve mentioned, since The Overstreet Comic Book Price Guide #40 in 2010, Gemstone Publishing has produced the limited edition Hero Initiative exclusive version of the Guide, and each year it has played a tremendous role in our fundraising efforts. The commitment of Steve Geppi and company to Hero has been sustained for more than a decade and has included some of the best cover artists in the business illustrating some of the greatest characters. That has clearly continued this year with Mike Grell’s distinctive take on Green Arrow and Batman,” said Jim McLauchlin, Hero Initiative’s President.

The standard editions of The Overstreet Comic Book Price Guide #51 feature Butch Guice and Brian Miller’s powerful take on Winter Soldier, Aaron Lopresti’s inspired version of the EC Horror Hosts (with its tribute to EC publisher William M. Gaines), and J.G. Jones’ beautiful flashback to the Golden Age with The Black Terror. These are available in soft cover ($34.95) and hardcover ($44.95). The oversized limited edition, The Big, Big, Overstreet Comic Book Price Guide #52, features Rick Burchett’s amazing Impact era version of Archie’s The Black Hood, and there’s also a 40th Anniversary of Diamond Comic Distributors exclusive montage of every Guide cover to date. These will retail for $54.95.

The Hero Initiative is the first-ever federally chartered not-for-profit corporation dedicated strictly to helping comic book creators in need. Hero creates a financial safety net for yesterday’s creators who may need emergency medical aid, financial support for essentials of life, and an avenue back into paying work. It’s a chance for all of us to give back something to the people who have given us so much enjoyment. Hero is a federally recognized 501(c)(3) charity. The Hero Initiative Limited Edition Hardcover version of The Overstreet Comic Book Price Guide #52 is scheduled to go on sale Wednesday, July 20 through the Hero Initiative web store on the Graham Crackers Comics site and at a limited number of Hero affiliate retailer stores. This version will be available in hardcover only and is limited to 500 copies. The retail price is $44.95.