A great day at DC Comics, as Hero Initiative brought Russ Heath to the offices to meet the crew, visit the library, and have lunch! A splendid time was had by all! 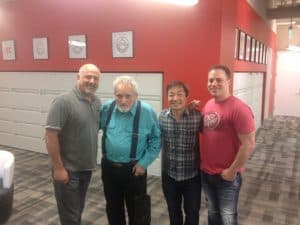 At 86 years old and with a bum knee (or two!), things are just a little more difficult. But Hero Initiative has been able to help me with finances, smooth over some medical expenses, and find me
some very nice-paying art jobs. And now, one of their associates has just helped me in a new and immense way.

I did some animation work back in the 1960s and was part of the Motion Picture Industry’s Pension and Health Plan. I paid in to the plan…and forgot about it. The 1960s were a long time ago. Well, earlier this year, the Plan finally tracked me down and told me they had a lump sum of old money for me that had accumulated some interest and benefit. The notice came along with 11 pages of documents that were a little different to navigate. So I called the Hero Initiative.

They set me up with Harlan Wenig, their financial services advisor. Harlan speaks the language of those 11 pages a lot better than I do. Hero got copies of the documents to Harlan, and he called me to review and explain everything. He then conference-called the Plan with me on the line, and stayed on hold with me for hours as we were routed from department to department. Harlan had a feeling about something in those documents. Turns out…he was right.

Looks like I actually had about five times the money coming to me the Plan originally thought. Harlan knew the questions to ask, the people to talk to, and the way to get things taken care of. He was cheerful and professional throughout, and got the job done. At the end of a two-hour phone call, and once I finally got all the documents signed and sent in, I had a very nice check coming to me—again, about five times what I originally expected.