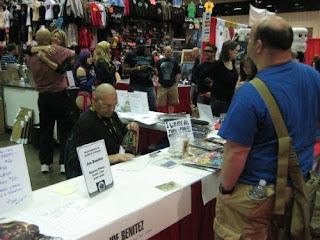 Hi, everyone. I have never “blogged” before, and I guess it’s about time I entered the world of the future. I really need to say “thank you” to a lot of people, and I guess this is a poor attempt at doing just that.

Thank You are two little words that do not hold nearly enough weight and perform so weakly when it comes to the gratitude and honor I hold for all the people of the Hero Initiative, both behind the scenes and those “in front of the camera”.

I was a guest at Mega Con in Orlando this last week, and it was a special trip for me. Very special. I used to be a writer, and while I still write a little — I will have a page in the new Hero Comics, drawn by the wonderful SR Bissette!, a dear, helpful friend — but I mostly struggle along against a debilitating cancer and try to be a single Dad to a five year old boy named Leo. You see, I am around him 24/7 and honestly do not have much truck with adults outside of doctors, and I can only marvel at the kindness, the graciousness and undeniable good will of the people of the Initiative, of MegaCon and of the “business” at large.

Chris Klamer, Diana, Joe, Tabitha, the great George Perez and everyone else were so kind and wonderful to me as I sat there, pretty much out of my element, and often in a great deal of pain due to this particularly nasty cancer, feeling like a lump behind the table at Booth 525, The Hero Initiative Booth at Megacon. I have not been to a convention in a long time, and was amazed at the talent represented there. I am “not worthy” as Wayne and Garth would say.

Everyone should support The Good Work The Hero Initiative does, and I wonder if people know just how important the idea behind the Work is, especially to me. I overheard George Perez say it best when a Mega Con goer commented he had not heard about The Hero Initiative. George said, “Comic book creators do not have a safety net or healthcare or pensions and we are here to help when creators fall on hard times.” The person replied, “That’s a Good Cause” and donated something.

A Good Cause it is, an amazing one, especially to me.

I want everyone to know The Hero Initiative saved my very life with it’s good will, generosity and kindness. They allowed me to seek some medical help and enabled me and my son to put a roof over our heads — I was homeless with that little boy in my van last year. The Initiative gave me the breathing room to get some Medicaid and food stamps, and while we are always in danger of losing our home, electricity and belongings at any moment, I will always be grateful from the depths of my heart for the past six months of fairly solid home life I have had with my little boy.

I was treated by the Iniitiative folks with a respect and decency I am simply not used to, having to endure at the mercy of Government Officials, as I to go through the Social Security Disability application process to secure a monthly income, and live off food stamps and $200 a month State assistance. It is an amazing thing The Hero Initiative does — and they do it with a respect and kindness that makes those two words, Thank You, so ineffective.

There was an article in the Orlando Sentinel about me, and while they got some things wrong (why they showed the cover of a Thundercats comic I did not write — I wrote a bunch but not that one — is one of those things) and I hope, with all my heart, that it helps bring more attention to the Initiative.

I’ll be honest here, and it’s not a comfortable subject; I am going to die — we all are “going to die” but I have recently found out death is charging me like a knight with a lance, like a panzer tank, like the Thing smashing out an engine block in that old Kirby FF. There is a chance, I guess, I might make it to the next MegaCon, but it’s pretty slim. I wish there is something substantial I could do for the Hero Initiative — if anyone has any idea along those lines feel free to email me.

I would LIKE to spent the rest of my life writing as many comics as I could, but it’s a tight market and “the kids” run the show — this new generation of comics creators are amazing artists, but let’s face it, no one has anything over George Perez, nor does any younger writer compare to Marv Wolfman or Chuck Dixon. Old guys. Not that I am in their league — but I am their age.

What these fellows have over me, besides talent, is a healthful life and many more years to create wonderful stories and images. I envy that, honestly, and urge everyone to support their works. I urge everyone everywhere to DONATE to the Hero Initiative, because life can change with frightening rapidity, and like George Perez said to that MegaCon goer — “Comic creators have no safety net.”

So thank you, Hero, thank you again – you were my net and gave me a chance to spend at least another year here among all you fine, outstanding people.
Thank you … two little words. Not enough, if you ask me.

My Lunch With Joe Quesada
Scroll to top