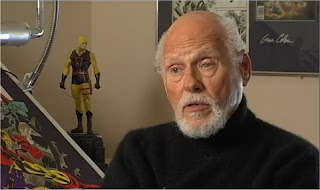 One of my favorite quotes of all time comes from Jackie Robinson, who once said that, “A life is not important except in the impact it has on other lives.”

Many others are eulogizing and chronicling the life of Gene Colan today, as well they should. Here are a few anecdotes that speak to the impact Gene Colan had on others’ lives, from some people you might not know.

Hero Initiative volunteer Wendi Freeman:
“I remember two years ago, and the greatest experience I could have had at San Diego Comic-Con was getting to hold Gene Colan’s hand walking him back to his table from the Hero booth. Thank you so much for those moments, and for everything Hero does.”

Hero Initiative volunteer Ray Feighrey:
“Gene was extremely gracious to me when I was introduced to him a couple of years ago and he signed my Iron Man #1 print. That image that has great personal significance to me, as my Dad gave me a copy of Iron Man #1 for Christmas when I was a kid. I was a huge fan of Gene’s, as you know, and he will be terribly missed.”

Hero Initiative volunteer Tony Tower:
“I had the great pleasure of interviewing Gene Colan for a Hero Initiative video back in early 2009. Along with my friends/crewmates Mike and Ethan, we traveled out to Gene’s home in Nassau County. Gene could not have been a more gracious host, and I think his humble, almost shocked gratitude at Hero’s support really comes through in the video.

“Our little trio really hit it off with Gene. He was quite the film aficionado, so throwing him in a room for a couple hours with three guys who work in TV (two of whom went to film school)…well, let’s just say there was a lot of classic movie talk in between the proper interview questions about Gene’s career and the good work of Hero. It certainly helped me get past any fannish nerves at talking with the guy who drew some of my favorite Captain America stories, or all the Batman comics I read as a kid, or THE image of Iron Man we all know so well: 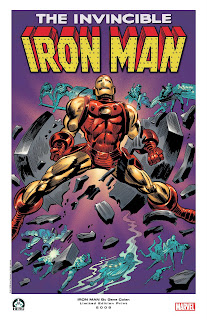 “Flash-forward to that fall’s New York Comic Con. I was volunteering at the Hero Initiative table there, and was delighted to see that Gene had his own booth as well. Saturday was my day to look around the convention floor and shop, so I made a point of catching up with Gene. I later got an autograph from actor Robert Culp of Greatest American Hero fame (now sadly departed as well), and chatted briefly with him.

“Sunday morning I was on-duty at the Hero booth, and about 20 minutes before the show opened, Robert Culp was roaming the floor. He paused in front of our table, with a somewhat baffled expression on his face.

“Emphasizing his words in a distractingly Bill Maxwell-esque way, he replied, ‘Yeah. I don’t know what you’re doing here. What’s this all about?’”

“So I went into my version of The Hero Initiative spiel. Mr. Culp was quiet interested. He apparently was a cartoonist himself in his youth, and was conversant with the names of several comic book and comic strip artists from the 1950s and 1960s. Since that was the period he knew, I figured I’d give him a ‘f’rinstance’ from that era:

“’Well, one of the artists The Hero Initiative has been able to help is Gene Colan.’”

“Without missing a beat—‘Gene Colan? I remember Gene Colan’s art. Guy drew like a dream.’”

Remembering our discussion of film and actors, I had a feeling nothing would please Gene more than to know that Robert Culp was a fan. So I described where Gene’s table was, and told Mr. Culp how excited Gene would be to meet him. I would have walked him over myself, but was manning the Hero table alone just then and couldn’t get free.

A few hours later, I managed to slip away and check in with Gene, and asked if he’d had any interesting visitors that day…

Gene Colan obviously had a lot of fans, me included. But I have to think that meeting was extra special for him. So in addition to all the other support The Hero Initiative provided Gene in his later years, it helped make that moment happen as well.

And one from a current comic artist, who chooses to remain anonymous:
“I have no idea how you’re feeling right now. But the first thing I thought of when I heard the news was, damn, all of us, without exception, have to go sometime, but there has to…HAS TO…be a difference between dying with or without hope. And however you feel, Jim, I really hope you and everyone involved in the Hero Initiative eventually can feel a sense of pride, or happiness, or SOMETHING positive, for, at the VERY least but possibly MOST important, giving a man hope, especially through a time where I know in my heart people would need it most.

“I’m proud of you. I’m proud to consider you a friend.

“My thoughts are with you, for what they’re worth.”

My Lunch With Joe Quesada